While drummers are the gasoline for any band, it’s the bassist who manages the smooth melodic transitions from 1st gear to 2nd to 3rd to reverse and so on.  Bassists can stand out through sheer power, insane rhythmic sense, melodic creativity or sometimes a mix of the three.  In no particular order, these are the unheralded bassists who consistently command my attention in every song they touch.

1. Dan Maines (Clutch) – An absolute rock solid monster of groove with chops for days, he teams with drummer Jean-Paul Gaster to create what I believe is not only the most underrated but THE best rhythm section in rock.

2. Stuart Chatwood (The Tea Party) – Somewhat overshadowed at times by his bandmates Jeff Martin and Jeff Burrows, his bass work is loaded with creativity, melody and tasteful licks. Chats’ multi-instrumental talent only adds to my respect of his playing. Had the pleasure of meeting him and the two Jeffs back in ’95…very cool and gracious people. 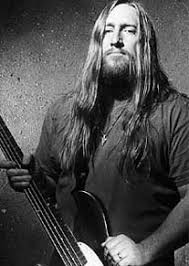 3. Scott Reeder (Kyuss) – The only barefoot bass player I’ve ever seen (Tipitina’s in New Orleans on the Sky Valley tour), Reeder did some wonderful stuff with Kyuss and made full use of the creative freedom he had within the framework of their very jam-oriented sound.

4. Kib (4 Mag Nitrous) – Now I’m admittedly partial because I know the guy, but he just flat out rocks. Alternately powerful and melodic, he’s the kind of bass player you want laying the foundation for songs and has great live stage presence.

5. Lemmy (Motorhead) – Pure power. It can be argued that he’s no Geddy Lee, but the truth is the man pioneered an influential sound that started with his distorted/overdriven buzzsaw bass.  Influential across 3 generations.  He ain’t no slouch on the instrument, either.

6.  Vaughn Stokes (Hot Head Show) – From my fave new band this year and my fave album of the year, Stokes carries HHS’s songs with deft fretwork and an uncanny penchant for consistently interesting melody lines.  The perfect foil for Jordan Copeland’s twisted guitar riffs and one of the most fun bassists you’ll ever hear. 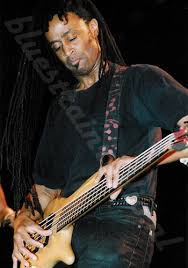 8.  John Nowlin (Barkmarket) – Chops and a penchant for hummable melodies amidst a wave of atonal guitar dischord in the labyrinthic quagmire that is a Barkmarket song, Nowlin provided the power and rock-solid foundation for said power trio along with Abysmal drummer Rock Savage.  Just a total blast to listen to.

9.  Liam Wilson (The Dillinger Escape Plan) – This guy has an even more difficult job than John Nowlin of Barkmarket, whatwith The DEP’s confounding song anti-structures and drifting in and out of actual melody.  Not an easy listen by any stretch of the imagination, but without a doubt a worthwhile listen for chops, craft and skill.

10.  Frank Bello (Anthrax) – From probably the most under-appreciated band of the Big 4 (Metallica, Slayer and Megadeth being the other 3), Bello won me over years ago with his ridiculously energetic performance on the “Oidivnikufesin” live video.   One of the few bassists of this genre who’s sound cuts through the mix, he has chops and an amazing ability to be a showman without losing the groove.

11.  Daniel Tichenor (Cage the Elephant) – Dude has chops and, like other Abysmal bassists, a melodic sense that complements every song.  One of the things I love about this young band is their obvious musical intelligence with regard to all things classic rock from Dylan to Hendrix to Zeppelin.   Tichenor’s bass work on “In One Ear” has a nice little homage to Hendrix’s “Manic Depression” (either intentionally or unintentionally) and is a nice example of his knack for finding just the right bass lines for CTE’s songs.  Onstage he almost plays the straight man with all this madness going on around him.  Cool beyond his years.

And here it is!!!   This is the long-awaited list of the Top 10 Most Truly Abysmal Band Names…band names that are cool, funny, clever, crazy or whatever, as long as they’re memorable but not a household name.

Take a look, have a laugh and click on the links…you just might find your new favorite band!

1. Tricky Woo – Because I don’t know what the hell it means…and it makes me laugh!  Thanks to my bro Paul Ledoux for introducing me to this band.

2. Mudhoney – Just gotta love a grunge band name taken from a Russ Meyer film.  It actually is a good descriptive for the gooey, sludgey sounds the band still makes to this day.  Great call, Darren.

3. Ned’s Atomic Dustbin – The name just makes me smile.  I don’t even know exactly why…it just sounds cool.  Thanks for the suggestion, Greggo!

4. Celtic Frost – One of my all-time favorite band names…just really cool with a real mystique about it.

5. MC 900 Ft Jesus – Originally a team with DJ Zero (now out of the music biz since 1995), I’ve always thought this was the most OTT rap name ever.  The name was taken from a sermon in which Oral Roberts claimed that he had received a vision of a 900 foot tall Jesus, who commanded him to build a hospital on the campus of Oral Roberts University.

6. Cage the Elephant – Because it’s unique…and SO open to interpretation.  I  hope they’re around for a long time.

7. Gruntruck – I remember seeing these guys open for Circus of Power (another cool name) at the Varsity Theatre in Baton Rouge, LA back in ’95 (calling Paul Ledoux!).   Just a cool sounding name that also describes their sound quite well.  This inclusion dedicated to lead vocalist/guitarist Ben McMillan, who died from diabetes on January 26, 2008.

8. Barkmarket – Another one that I love because it makes me crack a smile. Totally fun band name and quite the radical sound to go with it.

9. Skinny Puppy – There really is nothing more to say.  I mean really…   Thanks Darren for reminding me of one of my fave band names from my college days.

10. World Famous Nobodies – Maybe I’m biased ‘cuz it’s the band I’m in, but when my bro Paul Ledoux came up with this name I thought it was the coolest name I ever heard. And it never fails to make me crack a smile to this day.

11. The Well Hungarians – I know nothing about this band except that they’re a country band…and I don’t care.  I just can’t stop laughing.  As you’re reading this, I’m probably still laughing.  It’s your fault, Greggo!

Special thanks to Greg “Greggo” Liebrand and Darren “Darro” Cochran for some truly Abysmal recommendations.

Barkmarket is an amazingly original band and yet another one that got lost in the shuffle during the 90’s alternative boom, though they caught the attention of the ultimate rock producer Rick Rubin and were the first band he signed to his Def American label.  Really, theirs is a sound that is as alternative as you can get…distorted guitars and power-trio arrangements being very much the hardcore/rock hybrid, while song structures (or lack thereof) are very free-flowing and jazzy in their openness.  Closest comparison I can come up with is The Jesus Lizard, but with more melody and the occasional chorus you can sink your teeth into.

Check out my fave track from this CD, “Pencil,” and you’ll have a really good idea of what to expect from this band.   There are two cover tracks here, as well, though you’d never recognize them given the thorough psychotic Barkmarket treatment they receive:  “Back Stabbers” by the O’Jays and “I Don’t Live Today” by Jimi Hendrix.   I remember Blackie Lawless of 80’s shock rockers WASP once saying “Cover songs are pointless unless you make the song better or at least change it.”  Barkmarket has certainly changed the songs and made them their own.

“Grinder,” “Ditty” and “Hydrox God” are some other choice tracks on this CD, but the truth is you should listen to “Pencil” in its entirety first.   There is no middle ground here…you’re either going to be on board or totally turned off, thinking “What the hell is THAT?!”   “Pencil” is a 5-minute tune that is like 3 mini-songs mashed together seemlessly.

As testimony to the talent of guitarist/vocalist/band leader Dave Sardy, he’s gone on to produce some fine albums for the likes of System of a Down, Bush, Jet, Marilyn Manson, OK GO, Wolfmother and a host of others.  In 2006 he won 3 Grammys (Wolfmother, OK GO, Marilyn Manson), 6 ARIA awards (Jet) and Brit awards for his work with Oasis, Marilyn Manson and Wolfmother.

His production prowess is on display here with his deft manipulation of cool sounds and sheer noise.  Like other bands in the abyss with multiple reviews, you can pretty much take this CD and the follow-ups ‘Gimmick’ and ‘L. Ron’ and stick ’em in your media player on shuffle play.  You either buy into the sound or you don’t.  I’m sold.

Update:  There’s not much I can find online from this album, but check these songs out and you’ll very much get the idea:  Whipping Boy & Dumbjaw (both from the Gimmick CD) & Feed Me (from the L Ron CD and containing some cool skateboarding in the vid).